An exterior shot of the Glossy Finish Trailer NORTHEAST FLORIDA — Haim Ariav built it, and so far they’ve come. And if they keep coming, it could change the way large youth sports events are photographed.

Ariav, president of Glossy Finish Inc., has outfitted a 32-foot trailer as a mobile kiosk and photo print lab, able to be set up in 30 minutes at events such as soccer tournaments, football jamborees and swim meets. Powered by a commercial-grade generator and custom-designed network and software, it has 16 flat screens where customers can search for action shots taken of themselves or loved ones and order prints that are ready in minutes.

With the trailer operating since February, Ariav has realized a concept he plans to make into a franchise business to tap into a several hundred-million-dollar industry that’s not fully tapped. A survey by Photography Marketing Association Inc. found that while more than 90 percent of parents who were offered photos of their children in youth sports bought them, only 60 percent were offered them.
Glossy Finish is on pace to gross about $500,000 in sales this year and is cash-flow positive, but Ariav’s bigger ambition is to showcase his small business as a proof of concept. 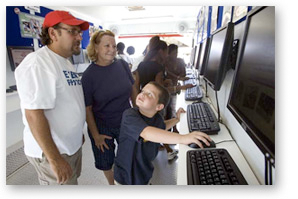 “We built the business to be a franchise from the start,” Ariav said.

He is starting to get help writing a universal franchise offering circular, a document required in the highly regulated franchising industry. Although the franchise fee hasn’t been set, he expects it will cost $100,000 to $150,000 to buy a Glossy Finish franchise, including fees and startup equipment. 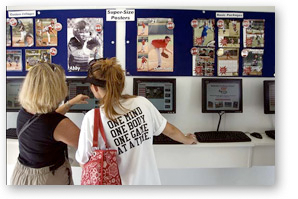 Customers inside the Glossy Finish Trailer using the custom applicationInstant, on-site printing was among the critical capabilities Craig Petroff, Florida baseball director for Triple Crown Sports, was looking for in an event photographer when Ariav contacted him.

Triple Crown, a Colorado-based company that produces youth tournaments, will do 15 events this year in Florida, with most involving 80 to 90 teams, mostly from out of town, in various age groups. For each event, Petroff needs a vendor to offer parents, coaches and players pictures to remember their exploits. And they prefer to be able to take them home.

“That process is exactly what we’re looking for,” Petroff said of the Glossy Finish trailer, adding that it’s been a hit at each of the several tournaments it’s been parked at. “They make it pretty easy.”

Nationwide, Triple Crown does about 200 events of various sports. And Petroff believes that if Ariav succeeds in franchising his business, Triple Crown sports directors in other states will be interested in booking Glossy Finish trailers at their events.

Mike Millay’s interest in Glossy Finish is personal, having seen the trailer at a soccer tournament his son was playing in. But as director of Disney’s Wide World of Sports, a multisports complex in Orlando where amateur and professional events are staged year-round, Millay can appreciate the concept and its execution.

“As a business model, it has real merit,” Millay said. “The product is the image itself. You have to have photographers with an eye for action and a delivery system.”

Millay said Ariav has called him for advice a few times, and “I’ve given him my insight.”

A Glossy Finish photographer during a recent football jamboreePhotographer Mike Jacobs learned about Glossy Finish while listening to a podcast featuring Ariav being interviewed by Shutterbug Magazine Radio.

Having shot several events as an individual contractor for Glossy Finish, Jacobs sees the trailer as reshaping the market for professional photographers.

“It gives us an added ability to show on a professional level what’s possible in youth sports,” he said. “And it helps photographers who don’t really know how to market what they do.”

Photographers who have shot for Glossy Finish like that the trailer brings a presence and generates excitement that reinforces the photographer’s value.

The main challenge for professional photographers, Jacobs said, is to show consumers why their rates are worth the cost.

Technology has made it possible for amateur photographers, who professionals often call “weekend warriors,” to shoot quickly and often. Many do it to follow their own children, but a large number offer their services at cut-rate prices.

ROOM IN THE MARKET

Although Glossy Finish is growing and earning a strong reputation, other sports photography companies in Northeast Florida continue to thrive largely because they’re mining a different part of the
youth sports market. 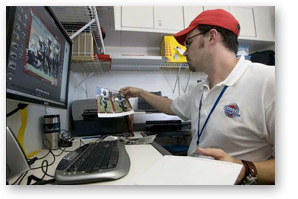 ossy Finish Creative Director, Chris MacEwan, examines a customer’s order printed in 5 minutes Gump attributes Glossy Finish’s ability to make money shooting games partly to its innovative process and partly to the fact that Ariav targets events involving mostly traveling teams. Those parents are more willing to wait a few moments for prints to be made because they don’t have to go home right after their children’s games.

Gump tried about three years ago to assemble a computer system for people to view and order prints. But he abandoned the idea as a result of frequent comments from customers that they liked being able to hold the prints.

Whether hard copies of pictures are provided or they’re viewable on a monitor, the key to success in photographing events is making immediate sales. And the system Ariav has built is the most advanced Gump has seen during his roughly 20 years in the industry.

“What Haim is doing is spectacular,” Gump said. “He’s going after something there aren’t a lot of people in Florida doing.”

And he’s busy doing it. “Every weekend there’s two to three events that we give up because we only have one trailer,” Ariav said.

For many events, parents can send a deposit toward their future orders to ensure a photographer spends time tracking their children. Also, teams can have several hundred pictures taken at one or more games written on a compact disc. The price depends on the event’s scope; at the upcoming event in Clearwater, one-game CDs are $250 and two-game CDs are $400.

Ariav is hoping the CDs will be big sellers. The pitch is that each player’s parents can contribute less to buy their team’s CD and then print as many copies of as many different pictures as they want, either at home or a retail store.

The PMA study found that 42 percent of U.S. households that got reprints did so using home computing equipment, while only 30 percent ordered them from the photographer’s studio. Also, 22 percent made reprints at retail photo kiosks and 20 percent got help at retail stores’ photo departments (multiple responses were allowed).

Although selling more CDs would eliminate some individual sales, it would increase Glossy Finish’s revenue. At a large event, Glossy Finish sells about 300 orders totaling $12,000 to $15,000 in sales. But if half the teams at an 80-team event buy CDs, that could generate about $12,000, while many will still order specialty items such as calendars and posters.

About 3 percent to 5 percent of the 150,000 photos Glossy Finish has taken at events have been bought, Ariav said.