“From Click To Carry” – Cover story in the Jacksonville Advantage magazine 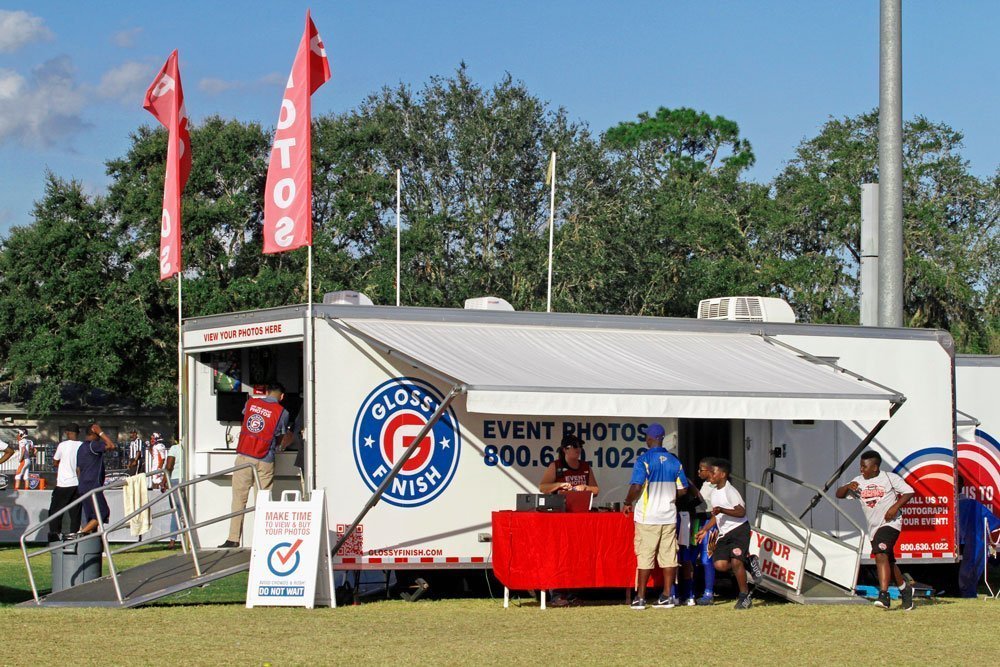 Glossy Finish Mobile Photo Lab What began as an idea for an online portal has turned into a mobile photo lab with a retail environment.

And that is just the patent Haim Ariav, president of Glossy Finish (www.GlossyFinish.com) and professional photographer, has applied for — mostly to protect the intellectual property, but also to add value to the Glossy Finish enterprise.

When he started four years ago, the intention was to maintain an online portal for photographers to take pictures around the country at sports tournaments and then upload them to Glossy Finish, where he would help market the photographs to families. But what looked great on paper just wasn’t the same in person.
While photographers were great at getting the photos, they lacked at obtaining the proper contact and marketing information. Ariav learned early on something had to change.

“I either needed to get out completely or find a better way to do it—and that’s when I said, ‘let’s build something and take the pictures to the people,'” says Ariav.

That something is a custom-built, 32-foot mobile photo lab trailer complete with 16 viewing stations, several printers, and a six server rack, which he can access to check the status of each computer and adjust the workload if need be.

To ensure safety, the gas-generated or electric-powered trailer was designed a little wider, a little taller, with air circulation and overhead lights. The on-board computer network is a closed system, but it has Internet access to remote in with the Glossy Finish office and developer working on the application.

All of the viewing stations’ wiring is inside the walls, with the monitors securely hanging off support system beams and the keyboards secured to shelves on top of cabinets.

“It was really made for this purpose,” says Ariav. “I joke that I could do camel races in the Sahara Desert as long as I had enough gasoline.”

APPLICATION IS THE TRUE BEAUTY

When Ariav did analyses of northeast Florida and sports, he found it ideal with its year-round abilities and felt the “evergreen” youth sports market, which is a $2 billion industry, was a large enough pie to get a slice of—then he built the two-part Glossy Finish model based on it. The first part is the traditional team picture day, and the second part is attending events with the trailer.

“We’re not the first people to shoot sports photography,” says Ariav, “but we’re probably the first company in the country to bring it to this level—meaning that we’ve built a business model specifically for the youth sports industry that allows instant gratification.”

That instant gratification and success comes from the application—all photos are shot, viewed, ordered, customized, printed, and delivered before a customer leaves any given event.

Part of that success is due to its proprietary software’s capabilities to run the entire operation. The software collects the customer’s cell phone number and e-mail address to allow their favorite photos to be collected and stored, thus alleviating “window shoppers” and giving those customers complete and fast access to their photos during the event.

From there, the customer can choose from a number of different packages including collages, posters, and digital CDs full of all the high-resolution images, and customizable options such as name, event, player number, etc. Then after just a few administrative steps, they cash out in the system. “It’s all shot there, processed there, and delivered right there,” says Ariav.

He used to hire photographers to photograph 100% of every athlete and get five or six shots of each one, but he soon realized that at any event they never sold to more than 20% of the families attending.

From this realization, he created a model of only photographing kids with a reservation. So now when a tournament begins, the brand ambassadors (salespeople) walk around with samples and inform everyone that if they want their child photographed, they need to sign up because we don’t do random photographs.

If they sign up, a $20 deposit is required, which is a credit toward anything they purchase. If they don’t like any of the photos, they receive their money back.

“We joke that we don’t want their $20, we want their $120; and once people see the value, they spend $120 because now they are looking at a screen filled with shots of nothing but their child, and not just five or six shots embedded in hundreds of photos,” says Ariav. “They start spending more and buying digital files, and all of a sudden we are still selling to 20%, but that 20% is now buying a lot more than it used to.”
EVOLVING WITH YOUR MARKET

“From our first event to where we are today has evolved so much. We know what sells, we know how to sell it, and we know what parents are looking for,” says Ariav, recalling their first 3,000 player tournament event on President’s Day weekend 2007 where they made $3,000, “but now we go to tournaments with less players and we can make $35,000 to $45,000 for the same time.”

In the beginning, they would attend any event they were invited to, mostly because they were happy to get a job and they were still testing the idea. But as he knows now, not every event is successful—so he looks at the return on investment and weighs it against the cost of towing the trailer and hiring photographers, salespeople, and graphic designers.

While at an event they may look bigger than life, Glossy Finish is actually a small business. Ariav says to manage his expenses and keep overhead low, they “inflate” on weekends and “deflate” on weekdays.

“I’m not going to deny that from an image capture perspective, we really are probably the best at what we do and it’s because of the people we hire—but I can’t have a staff of photographers sitting around with no event,” says Ariav, “so I have a pool of about 100 professional photographers from different areas of the Southeast U.S. that I call on.”

The minimum amount of people needed to run an event is three; one graphic, one sales, and one photographer. During the week, it is usually himself and two others running the office, but on weekends or depending on the event, they could have anywhere from 10 to 20 people working at a time.

The staff and all contractors are there from the first day of an event to the last day of an event and are required to wear a custom-made bib complete with the Glossy Finish logo on both sides, pockets for brochures and cards, and a lanyard for a walkie talkie. This helps assure the look of professionalism and the brand that Ariav is building.

EXPANSION IS IN THE AIR

“The initial thought was to build a business and then become a franchisor,” says Ariav, who already has another trailer built but not outfitted. “But with the economy taking a turn as it did and the startup costs of something like this, we decided to just keep building, pushing, and tweaking what we already established—and we’ve been fortunate to have some great events.”

For a while, he thought he pulled the trigger too soon on that second trailer, but he now has serious interest from another photographer based in south Florida who he has worked with for over a year and already understands the Glossy Finish marketing, photography, and computer system, and can really “own it.”

Ariav is structuring a relationship/partnership with the photographer for a possible first of the year launch where he will become a Glossy Finish division under Ariav’s umbrella and will be supported with software, computers, the trailer, and other intellectual properties that will allow him to spread his wings and build the Glossy Finish brand.

Ariav says he has been fortunate to have the success he’s had and plans to continue growing by changing up his products and creating partnerships and considering expansion plans that allow the brand and brand equity to be seen in other parts of the Southeast.

Ariav says, “It’s all about quality, service, and product mix, and at the end of the day you hope that when you get that triangle figured out, you can start generating money as well.”

Wendy Bautista is editor of Advantage: The Resource for Small Business. She can be reached [email protected] or 904-536-2234.

Haim Ariav, president of Glossy Finish (www.GlossyFinish.com) and professional photographer, figured out how to leverage the parents who like what his company does, but don’t want what they do, and he approached Shutterfly Inc., a $250 million company and one of the leading solutions for photo sharing and publishing on the Internet, with his idea.

Parents at events with digital cameras and the recent upswing in sales of his CD product got him thinking about how many people don’t do anything with these images—they stick the CD in a drawer or download the images off their camera and forget about them. But with Shutterfly they can do something.

Shutterfly liked the idea and believes in what Glossy Finish is doing and agreed to the deal. Glossy Finish will pass out $20 Shutterfly gift cards to its customers that contain a unique code. Once it is activated and the customer signs in, a customer acquisition fee will be given to Glossy Finish for generating a new customer for Shutterfly.

“I don’t want to build what Shutterfly already has,” says Ariav. “Let’s give them the opportunity to use their product line, and if I get a little something back in residual, great.”

Haim Ariav, president of Glossy Finish and professional photographer, occasionally puts on photo workshops at various events for photographers interested in shooting sports photography. He doesn’t charge for this, but does limit it to about five or six “students” for the half day course.

“It’s part of my way of giving back and embracing the Business 2.0 model of thinking—be open and show others as it will breed success,” says Ariav.